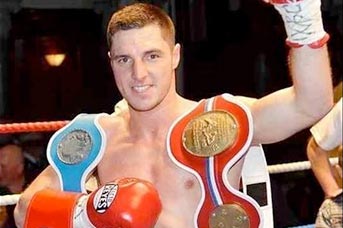 CDS has teamed up with boxer Tommy Coyle in a new knockout partnership.

We are one of the region’s leading service providers in the energy industry and, as part of our commitment to supporting local people and organisations, sponsor a sports team based in the city each year.

This year, we chose to support Tommy as he prepared for his fight against former world title challenger Michael Katsidis in October, which he won with a second round knockout at Hull Ice Arena.

Danny Laybourne, a director at CDS, said: “We are delighted to secure a sponsorship deal with Tommy Coyle. Tommy is a role model to a lot of young people in Hull, and was an obvious choice for us.

“The one-year sponsorship has already contributed towards Tommy’s warm weather training before his fight against Katsidis, a fight I’m sure every boxing fan in Hull enjoyed.

“Sponsoring an individual sports person is something we have not done previously but the chance to reward an athlete in a sport that requires such dedication and hard work was something that appealed to us.

“We would like to wish Tommy the very best for his future fights and look forward to our association with him and his team for the rest of the year.”

Tommy’s victory over Katsidis set up a mouth-watering contest against fellow Hull boxer and Olympic gold medallist Luke Campbell at the KC Stadium in the summer.